From Eyre Square to Times Square

From Eyre Square to Times Square 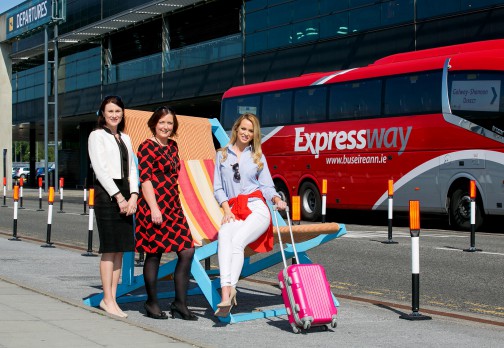 Sunday, 29 May, 2016:  Expressway and Shannon Airport have joined ranks to bring the City of the Tribes even closer to the rest of the world with the launch of a year-round service between the Midwest airport and Galway city.

Expressway has, from today, resumed the daily direct X51 service. In addition however, based on the success of last year’s June to October pilot, it is now being extended year round in a significant boost for Galway passengers flying from and to Shannon. Tickets can be booked at www.expressway.ie

The Galway-Shannon Airport direct service will comprise ten daily departures, five in each direction - - which will operate non-stop between Shannon and Galway. The service is linking in with peak time arrivals and departures at Shannon Airport, including early morning transatlantic flights. These are in addition to the 14 daily multi-stop services to Shannon Airport already offered on Route 51.

The X51 service will deliver 500 direct seats to and from the airport daily, providing excellent connectivity between the capital of the West of Ireland and the Atlantic seaboard’s busiest airport - with its expanding international network of services to 35 destinations across 11 countries.

Bus Éireann’s Regional Manager South West, Miriam Flynn said: “We launched this seasonal service from June to October last year, and its success means it will now operate year round from today. Shannon’s growth of international services over recent years has increased demand for access between the airport and Galway, and there is a very strong market as a result for this service.  We are offering a special fare of €10, to mark its reintroduction.

“The new enhanced Expressway Route X51 offers fast, direct connections to/from Shannon Airport and makes travel easier for all our customers be they commuters, holiday-makers, or business people. It will also be critical from an inbound perspective, not least for tourism and in supporting the success of the Wild Atlantic Way.

Mary Considine, Acting CEO, Shannon Group said: “We are really delighted that Expressway has decided, not alone to return with the direct service this year, but to extend it year round.  Shannon has services to all key international markets – the UK, US and mainland Europe - so this new daily non-stop bus service brings these markets even closer to the Galway region.

“Shannon provides essential connectivity for people holidaying in and around Galway, and with the completion of the M18 to Tuam set for 2018, access will be further improved. Once this happens Galway and Shannon will be even closer, creating even greater demand for the new express Galway to Shannon Airport service.”